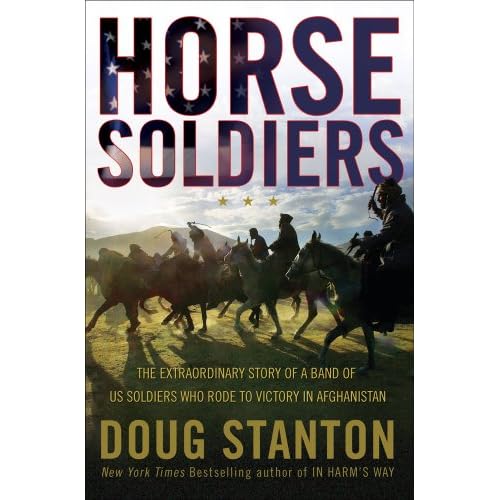 Doug Stanton, Horse Soldiers: The Extraordinary Stor of a Band of U.S. Soldiers Who Rode to Victory in Afghanistan.

Almost immediately after terrorists attacked American soil in September, 2001, members of the Army Special Forces began to prepare for entry into Afghanistan. While a nation sat shocked at the events of September 11th, these "silent warriors" relied on their own ingenuity and creativity to prepare for battle: Cold weather gear, batteries and modern GPS's were just a few of the things these warriors purchased on their own in the days leading up to their deployment. And their ability to improvise was a preview of what was to come in Afghanistan. As in past wars, no one had written a "how-to book" on war in Afghanistan. So the members of the Special Forces learned as they went along.

In a book full of characters, the journey of Special Forces Captain Mitch Nelson and the men under his command lay at the heart of the book, particularly the time Nelson spends with larger-than-life Afghani General Abdul Rashid Dostum. It is Dostum who shows Nelson the lay of the land in Afghanistan and who helps Nelson gain insight into the tribal/Warlord culture.

Throughout the book, Stanton illustrates the intricacies of Afghanistan's politics, such as how the leaders of the three rival factions of the Northern Alliance were fighting together while also positioning themselves politically and geographically for a peacetime nation. Stanton also shows the sort of deal-brokering that went on between the Taliban and the Northern Alliance, often facilitated by family and tribal ties. Dostum even mentioned to Nelson that sometimes he would go light on attacking the Taliban here or there if some of his men told him they had family in the opposing camp. In one instance, Dostum radioed the Taliban to tell them that he had Americans with him and that they were coming to get them!

For their part, the Special Forces, well trained in politics and technology, found one area in which they were unprepared: horsemanship. The Northern Alliance relied on actual horsepower on the battlefield. Stanton describes how, like warriors out of a bygone age, Afghani soldiers raced and rode at their mechanized Taliban opponents. And, with the help of well-targeted American bombs, they won the day.

Stanton doesn't focus solely on Nelson and Dostum. Several other members of the Special Forces have their stories told and one sub-plot involves the journey of the American Taliban, Johnny Walker Lindh, and how he ended up in Mazar-i-Sharif on the day 600 Taliban prisoners revolted. This last part of the book, which details the revolt and the attempt to take back the fort, is a clearly written and exciting read.

Stanton has produced a fine work of contemporary, boots-on-the-ground history. It's surprising that the story hadn't yet been told, but it was worth the wait. Now, onto the movie!
Posted by Marc at 6/07/2009